Many railroads at least experimented with using intermodal equipment on passenger trains, typically to handle US Mail contracts. These experiments came in several forms:

We will give a little background into these trains and then provide some example consists.

Prior to the advent of HEP, Passenger cars were heated (and sometimes air conditioned) with steam. This required an unbroken steam line from the locomotives, which produced the steam, to the cars that used them.

In addition to the steam lines, passenger cars had a second air line, used for passing signals between the engine crew and the conductor. Cars equipped for passenger service appear to have two air lines.

Cars equipped with steam heat and signal lines could be used anywhere in the passenger consist. Trailer Train, along with several other roads(Missouri Pacific, Rock Island, and Erie, as examples), are known to have obtained or modified standard flatcars cars with steam heat and signal lines. REA had a small fleet of COFC cars used to haul their own "Unit Haul" containers.

The Flexivan System was a container system developed by the New York Central in the 1950s. The system used truck trailers with detachable highway wheels. The trailers were backed up to the railcar and pushed off of the wheels and onto the car.

New York Central ran solid mail trains of Flexivan cars. Other large purchasers include The Burlington and the Santa Fe. There were several smaller purchasers as well. For example, the Seaboard purchased 3 cars in the 1960s. Most users utilized Flexivan cars for hauling mail. I am not aware of any Flexivan cars that were constructed without steam heat and signal lines.

The first RoadRailers were built for the C&O to haul mail. I have never seen an actual consist listing showing these trains, but in photographs, I have never seen more than one or two at the tail end of the train. Unlike modern RoadRailers, RoadRailers built up until the 1980s had their rail wheels attached to them near the road wheels.

C&O RoadRailers were 28 feet in length and had a single road axle and a single rail axle. I have only ever seen one C&O RoadRailers, and it had lost it's wheels entirely. It is pictured below. Photos from Garrett,IN on May 12,2001. 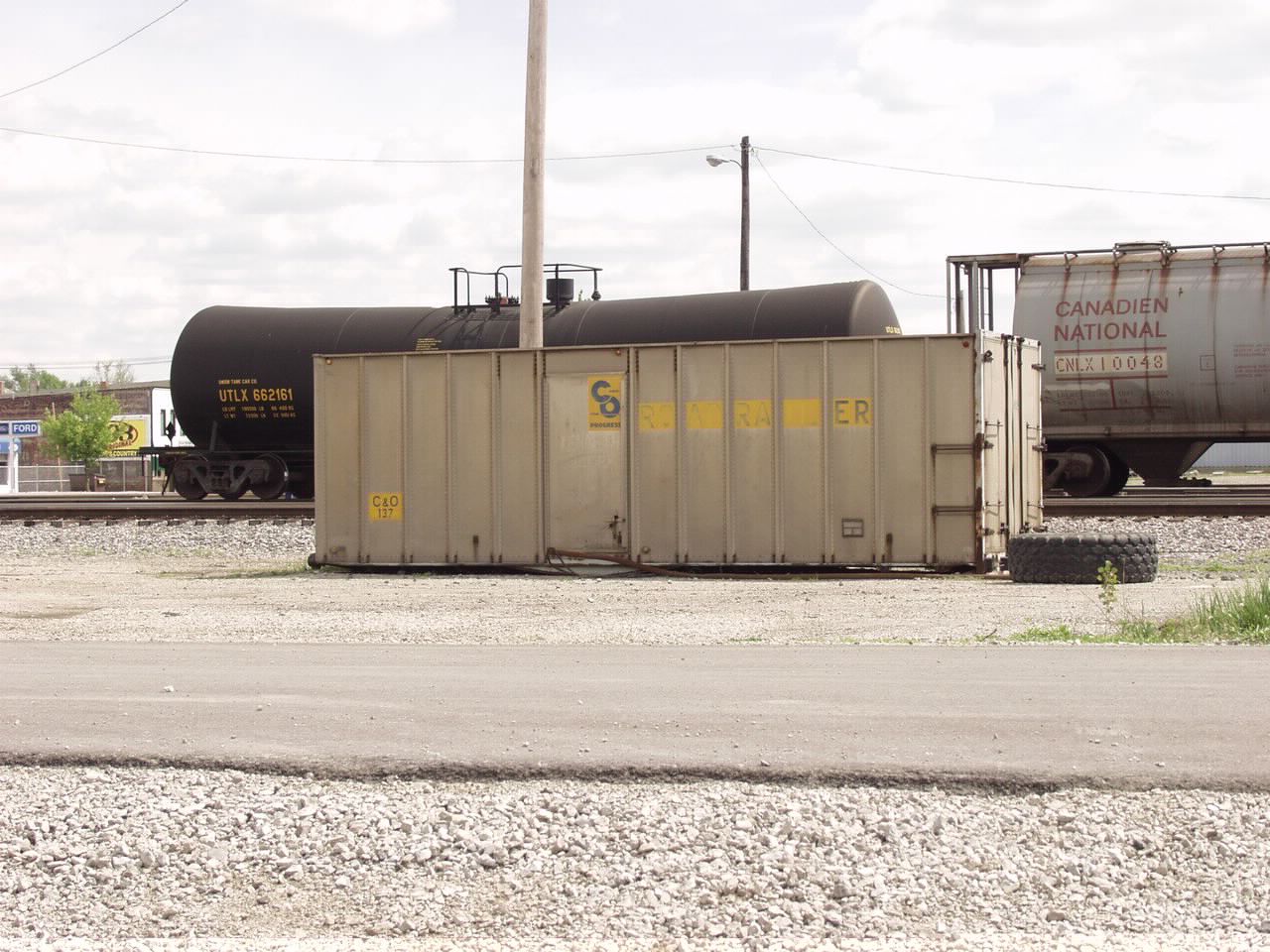 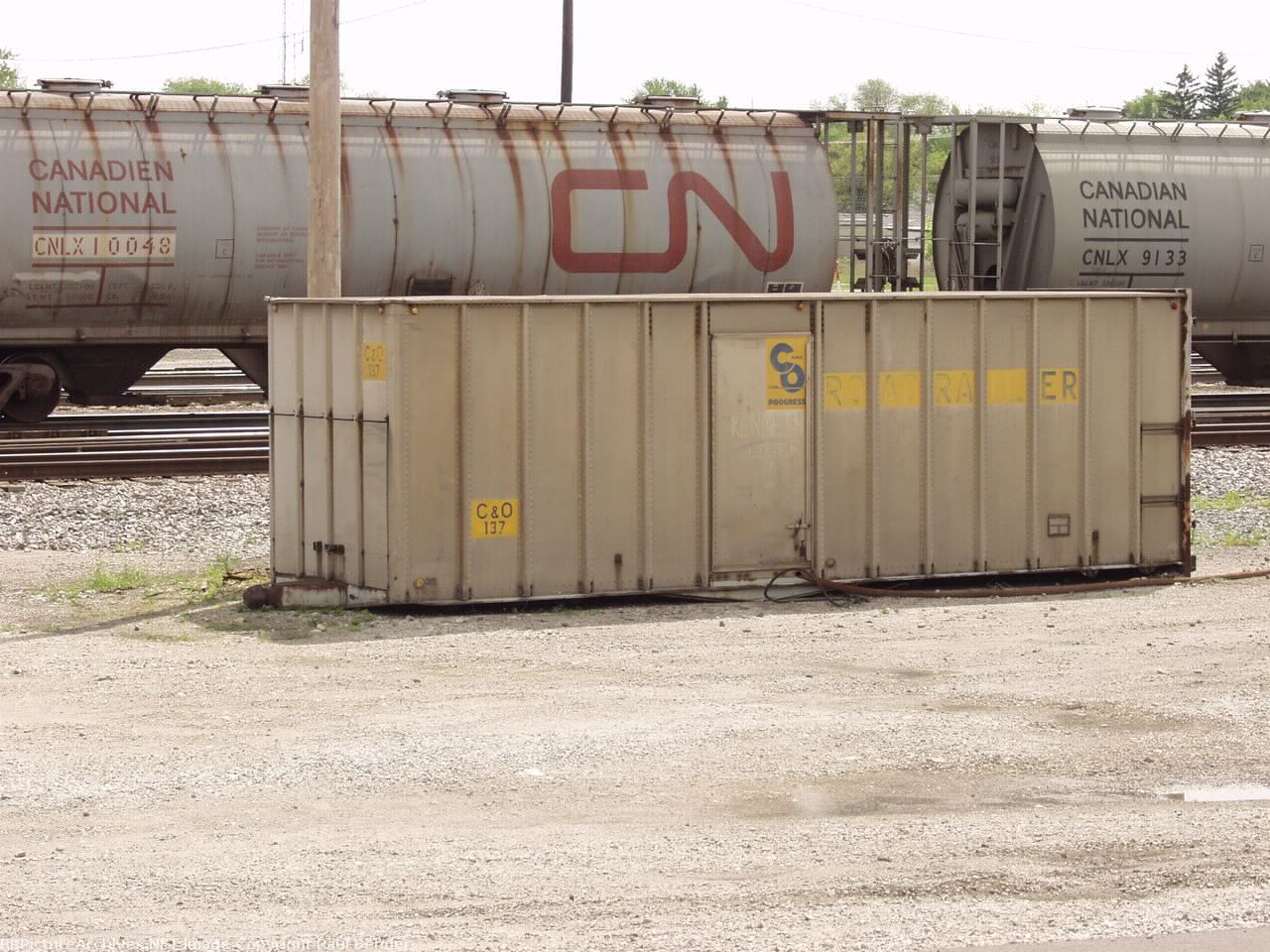 During the 1990s and early 2000s, Amtrak had a healthy express business. Boxcars, Material Handling Cars, Refrigerated cars, and RoadRailers could be found on trains. RoadRailers were handled exclusively at the end of the train.

In N-scale a representation of Amtrak's express business should include RoadRailers. Deluxe Innovations released their RoadRailers in Amtrak paint schemes

If you are interested in learning more about the equipment,Don Strak's UtahRails.net has a great article on Amtrak Mail and Express Service.

Amtrak's Three Rivers
This page has been created and maintained with pico and vi. Please address corrections and comments to paul.bender@acm.org